We’ve all used command line reverse shells like netcat, but I decided it would be nice to have a GUI that makes it more convenient to explore the remote machine.

So I’ve spent the last week making such a tool and just released an early alpha build. You can download it here: VbRev – Reverse Shell GUI | VbScrub

Just like netcat, first thing you do is start a listener on whatever port you want on your own machine: 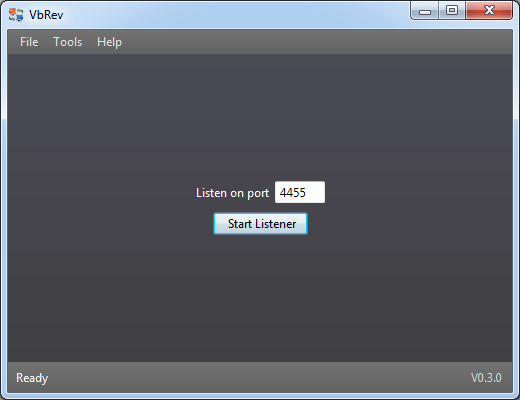 Then get the remote machine to run the server side executable and tell it to connect to your own machine’s IP address on the port you’re listening on:

Now back on our machine we can explore the file system of the remote machine quickly and easily: 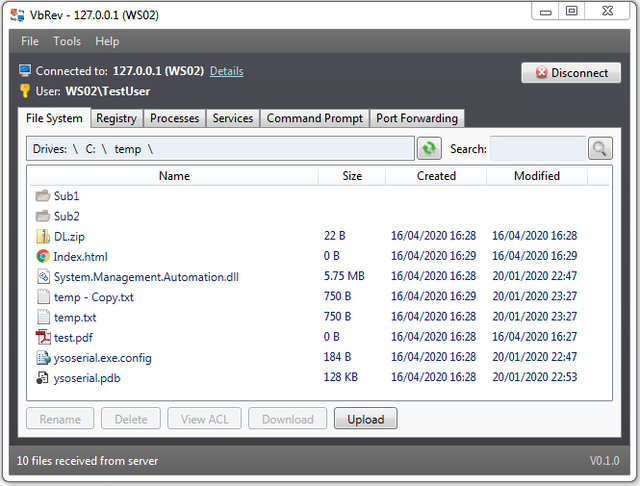 We can transfer files to and from the machine with the click of a button (and this is done over the same port the listener was running on, so doesn’t rely on SMB or HTTP etc on your machine): 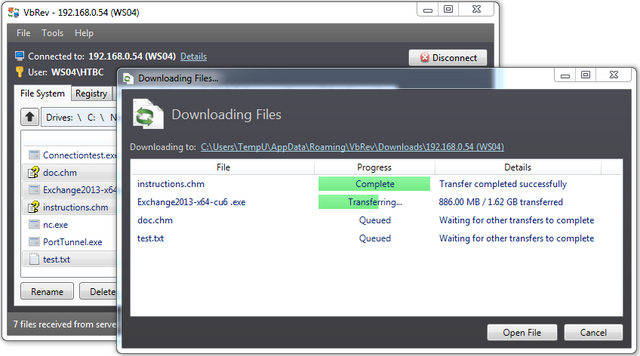 It also lets you start and stop as many “standard” reverse shells as you want without having to do anything on the remote machine again: 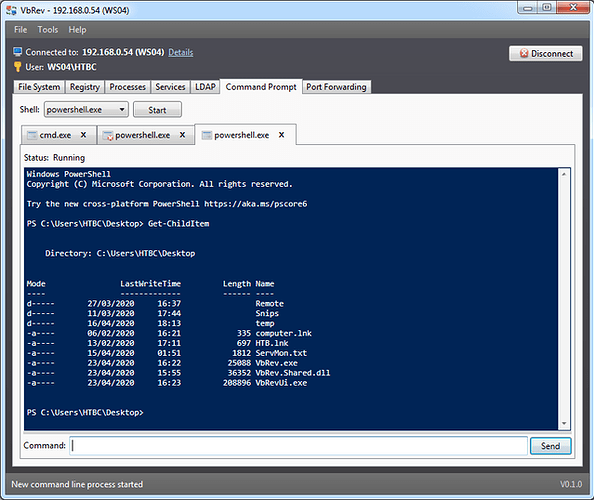 There will be a lot more features in the final release (like the ability to work with processes, services, registry etc) but for now that’s all that’s implemented in this early build.

Oh and I’ve made a video demonstrating it in a bit more detail here: 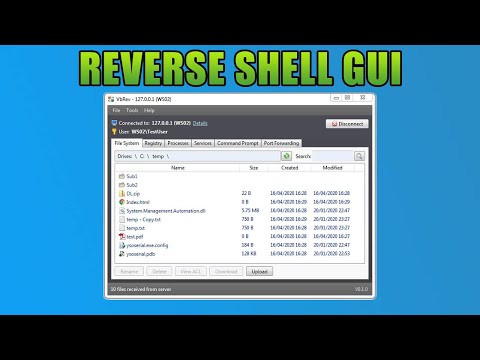 This requires the .NET Framework 4.0 or above. It only runs on Windows, but that’s fine cos you linux guys are too cool for GUIs anyway right

So yeah if you want to try it out, download it here and let me know any feedback you have (good or bad): VbRev – Reverse Shell GUI | VbScrub

Good effort. I think this will come in particularly useful for anyone starting out. I’d say i’d give it a go but like you said…linux XD
Some thoughts as i was watching the video we’re answered by the end but what about a display box showing the command line thats used to achieve the goal via the GUI? (Think zenmap) For example, downloading a file from a session? Could be a useful tool to learn.

@ByteM3 there is no single command line used to achieve each operation though - its all .NET code (and a lot of it)

@ByteM3 there is no single command line used to achieve each operation though - its all .NET code (and a lot of it)

Just released a new version of this which adds a few new features, such as:

The ability to list processes running on the remote machine (and end them) : 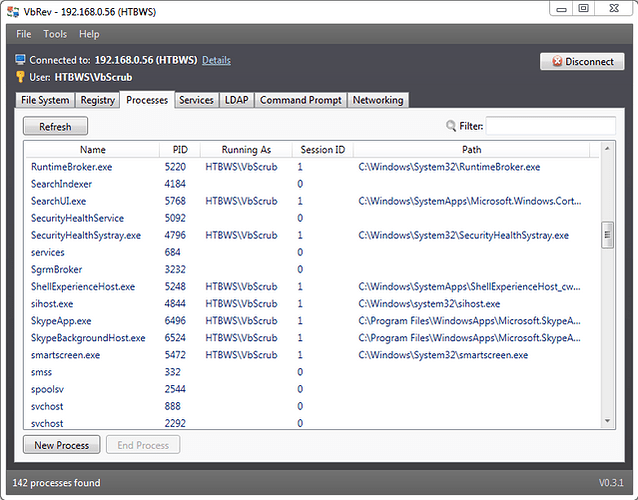 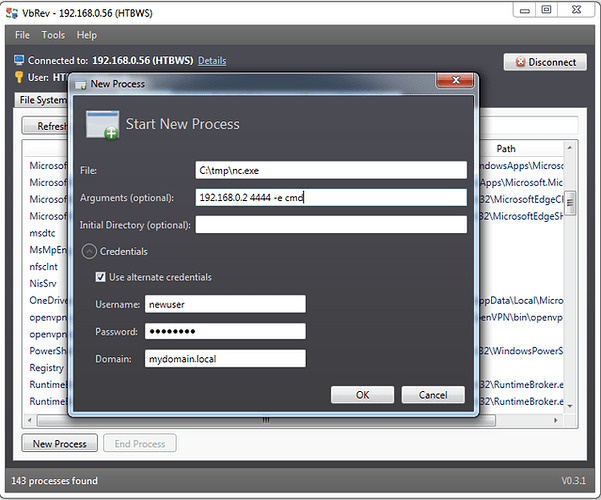 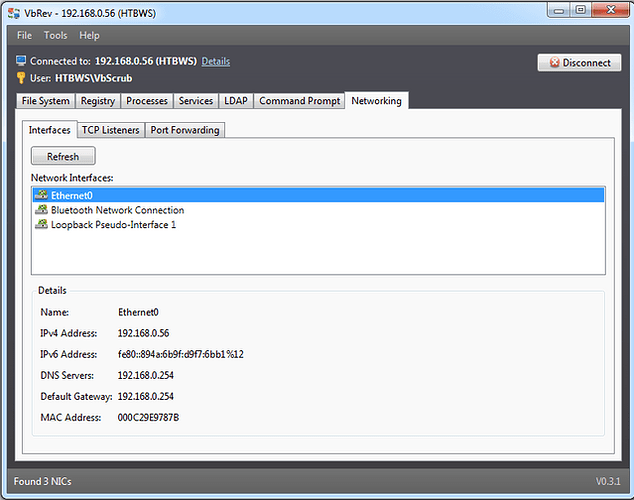 List processes listening for inbound network connections - like netstat -ano but actually includes the process name and is searchable (using the Filter box at the top) : 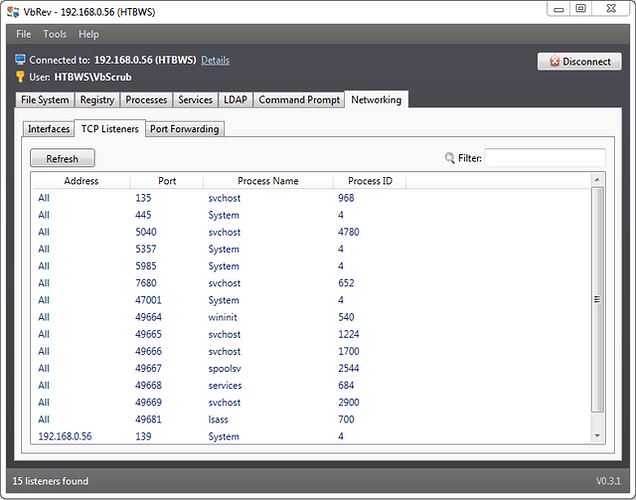 I’m debating adding some kind of vuln scanning to it as well, like just scanning for services with weak permissions at least. I dunno though, there’s probably already enough scripts out there that do that and do a better job of it

If possible, run programs and/or scripts in memory from attacking machine?

@Radiance said:
If possible, run programs and/or scripts in memory from attacking machine?

That’s a good suggestion, thanks. No idea if it will be possible for me to implement, but I’ll definitely look into it

EDIT: OK initial research is not looking promising for this feature lol I think I’d be able to make it execute .NET command line apps in memory, but anything other than that is looking like it would be extremely awkward and unreliable